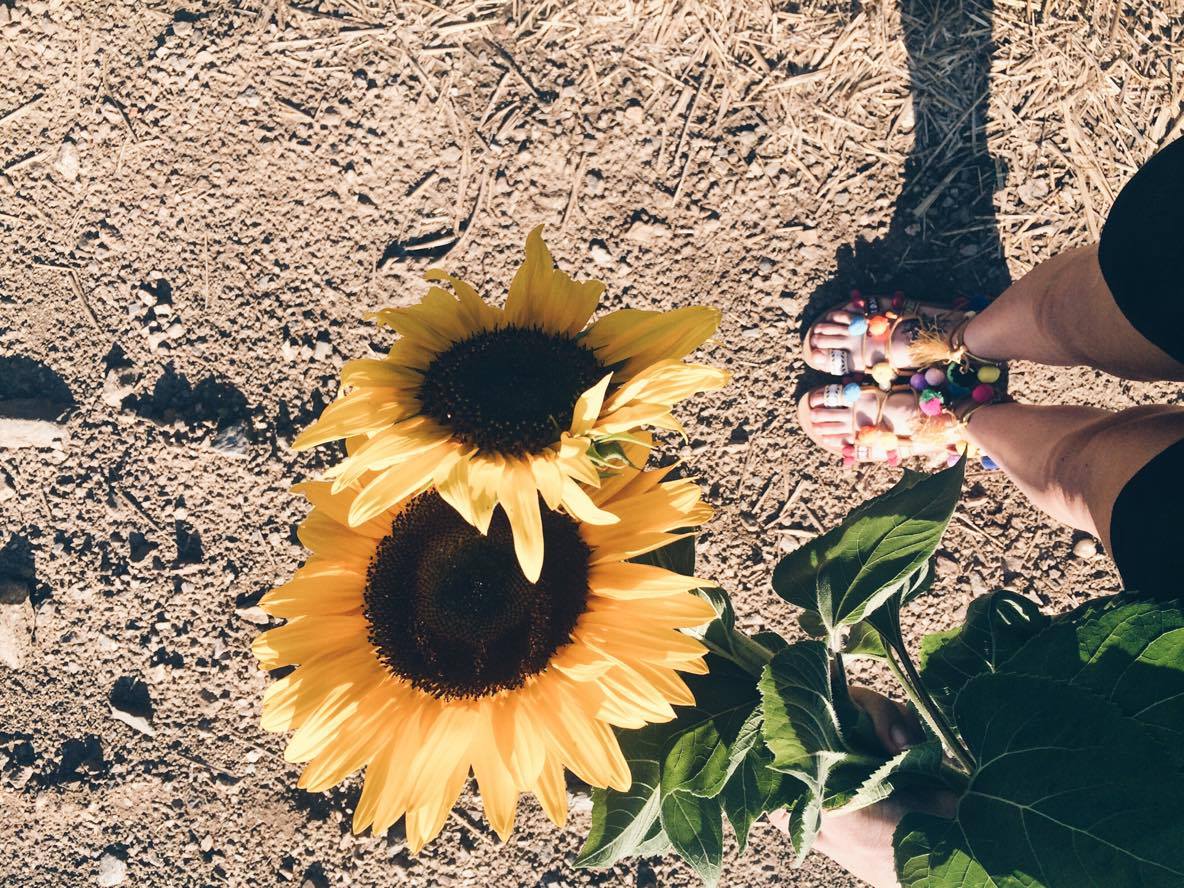 Social trust is something that amazed me immensely in Sweden and now also amazes me in Austria. While living in Sweden, I didn’t have to be afraid to leave the bike unattended – moreover, I rarely worried about locking it. Often I could observe the locals going to the shops, then leaving their bikes on the foot and going shopping. Choosing a bike as a transportation to the party was also not a strange thing – and if the bike had disappeared from the student union where the parties took place, it would most likely be found a few streets away around the dorms. But what has surprised me the most, was the fact that there are free cottages, which are cared by both residents of the regions and other travelers. I wrote about the phenomena the Swedish cottages and their social trust after a weekend visit to one of these places (click here to read more). Unfortunately it’s quite difficult to find such places and most often they are just known by the inhabitants or by experienced travelers – but everyone cares to not destroy them, to keep it clean and leave everything as it was. A similar solution to the self-service flower shop is the Swedish Loppis, which is basically translated as a flea market, and often appears in the form of small signposts, badges and pieces of paper hanging around. When we come across such Loppis it may look like a regular market, where we have the opportunity to talk to the seller, or in other hand, you can just see a table with different things (clothes, accessories, often cups and other kitchen items), exposed outside the house along with small box to throw money to. Interestingly, it often happens that on such self-service Loppis there are no prices – we throw as much as we think is right. And although Sweden, in terms of my positive experiences, undoubtedly rocks in this ranking, I am slowly beginning to appreciate the similar Austrian charms. One of them is the existence of a self-service roadside flower shop. 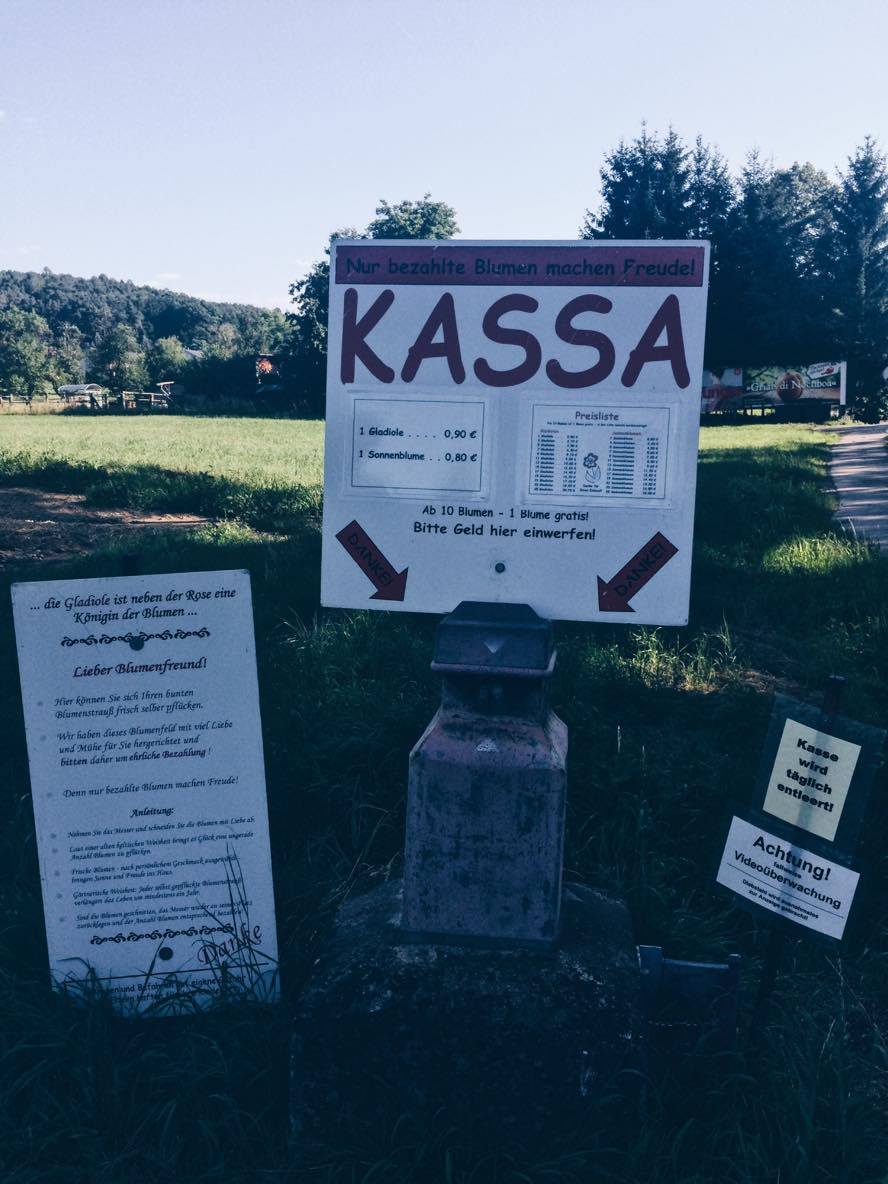 What is the Austrian self-service flower shop?

Self-service flower shop or rather self-service field is a real treat for the lovers of flowers and various plants. While passing along such fields, you often notice large signs with the inscription: Blumen (flowers) or for example Blumen schneiden (cut flowers), Blumen selbst schneiden (self cut flowers). The owners of such fields often plant sunflowers and gladioli on them, but there is also a greater variety, such as dahlias and others.On this self-service flower shop we choose the flowers we are interested in and we cut them by ourselves with a knife that most often waits for us at the cash box. Of course, remember not to damage other plants. After all, put the knife back into place and insert money in a special metal cans. Price is always given above. You can also take advantage of the various occasions and promotions, such as while buying 10 flowers we pay only for 9. This time I chose sunflowers (0.80 €), gladiole were little more expensive (0.90 €). 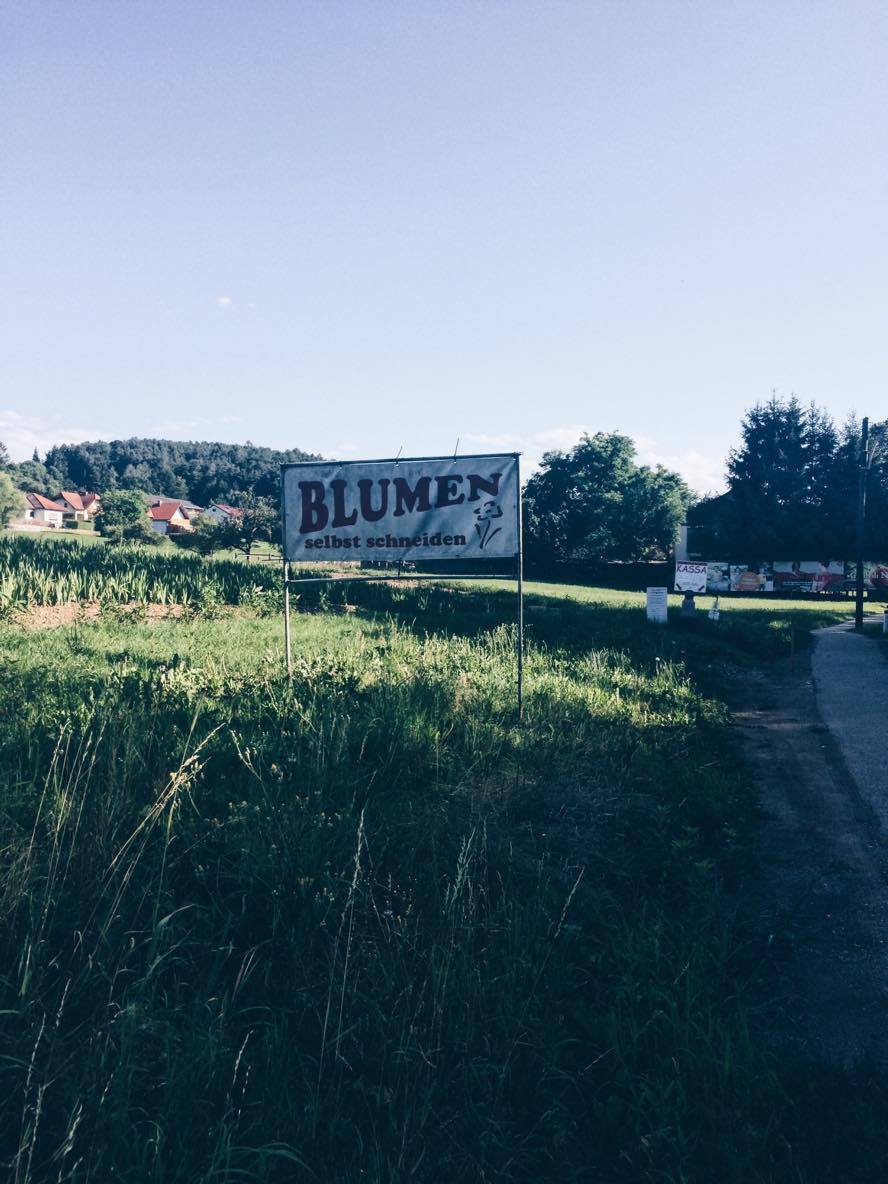 When I first saw such a self-service flower shop in the Austrian Wolfsberg, I immediately admired the positive aspect of this solution. Not only does the owner have the use of his little field, we save time stopping along the way, but also we save money – because cutting flowers by ourselves makes us pay less than in traditional slower shops. First of all it shows how big is the social trust in this country. Yes, the can is padlocked and there is often monitoring information, but in reality it is rarely possible to actually see someone appearing and controling it. Buyers show their honestly and thanks to that, the system works well.When I shared with friends  the photos from this place, I received a lot of feedback saying that: it’s a completely different world in comparison to the reality that they know. I always try to fight the stereotype of Poland as a synonym of dishonesty (I often hear jokes about Poles stealing cars), but to be honest, after seeing this field I was also truly surprised that nobody stole anything. And although I know that a similar system, such as the sale of apples or other seasonal fruits, can be also found in smaller towns in Poland, in the long run I would have great doubts before trusting customers. Sad but true. 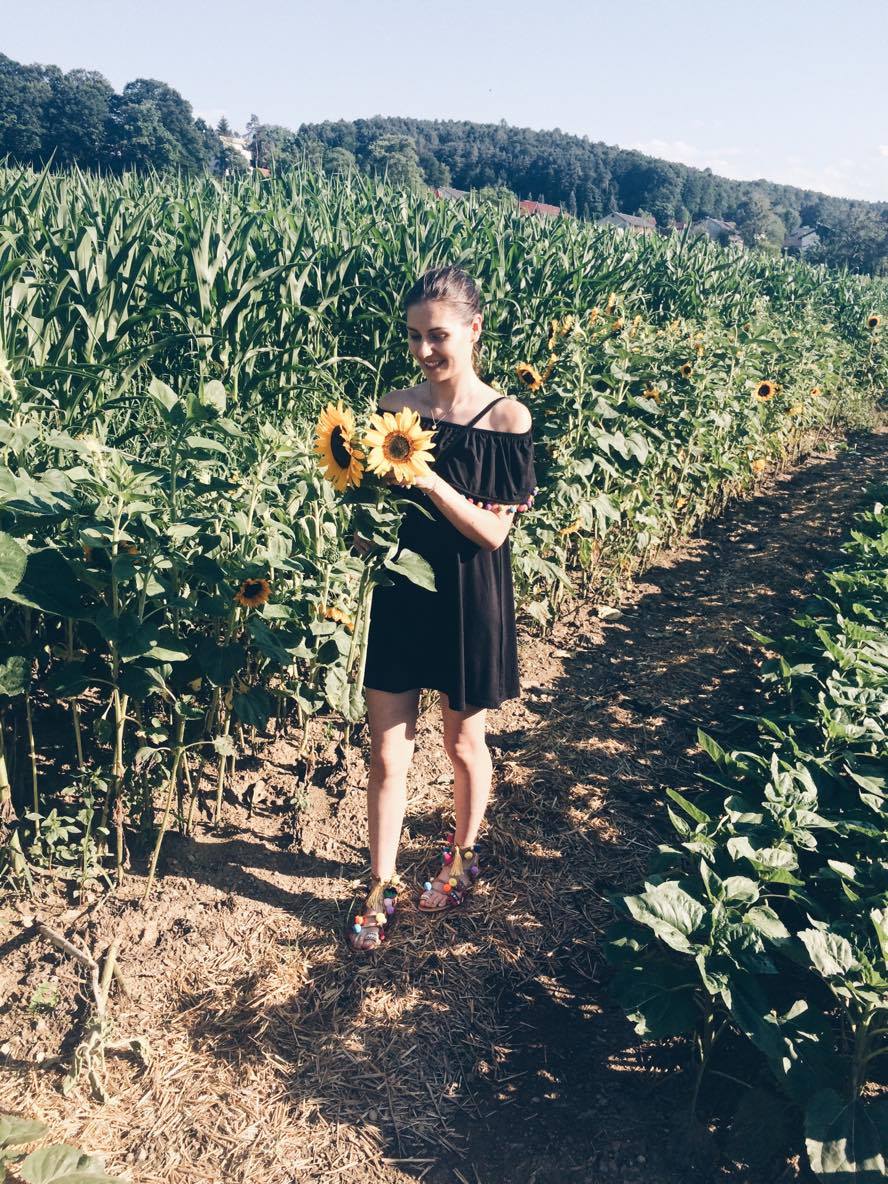 Where can you find self-service flower shops?

This is obviously not the only Austrian solution. Similar flower stores are also frequently seen in Germany, Switzerland, Scandinavian countries (eg Denmark) and probably many other places. During the trip across the Balkans, I also encountered a self-service mini farmers market, where tomatoes were displayed on the table. To find these self-service flower shops you need to look around the area but if you can’t find any, the internet will be your solution. You can simply check out many places on the map. I found a few pages like: proplanta, shz and many others. 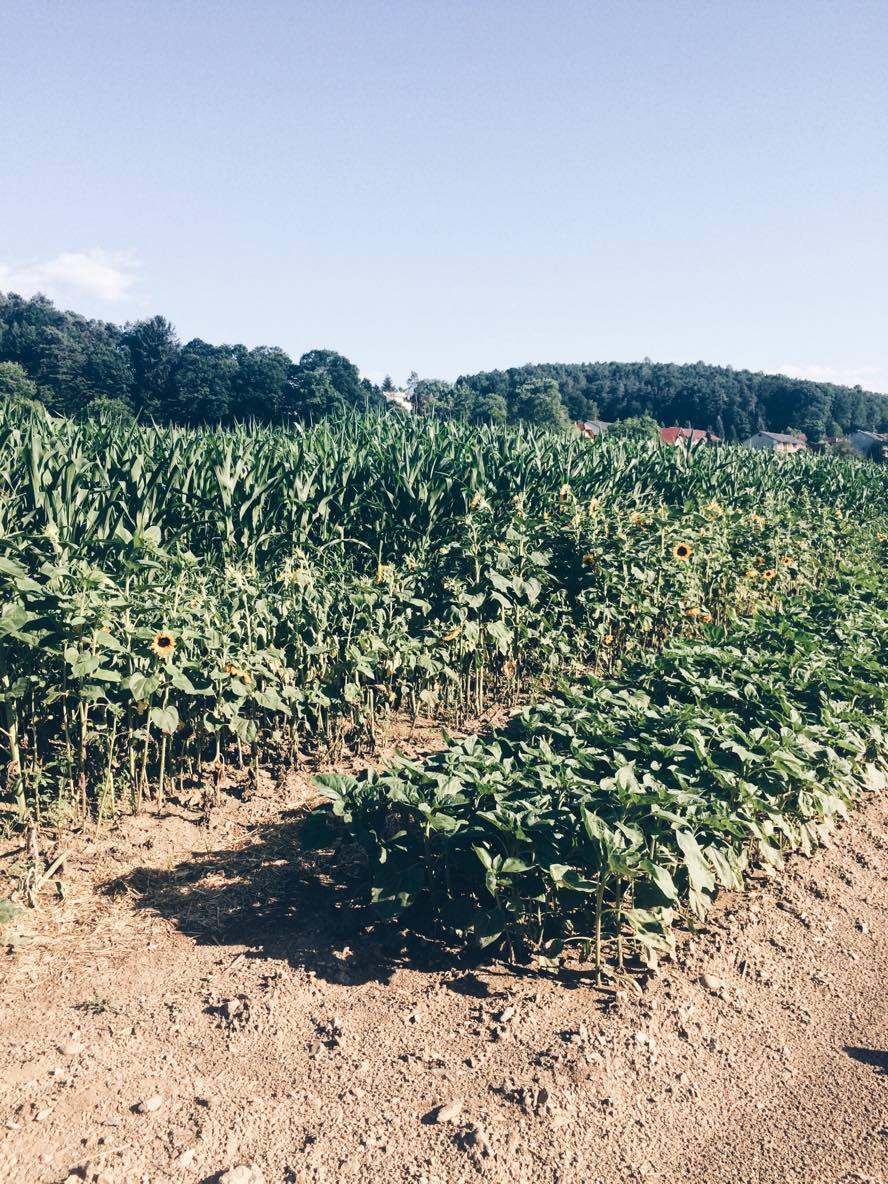 Did you ever see anything like it? What do you think about it?

Slovenia: Is Maribor worth visiting?

My 5 tips for how to achieve hygge mood at home